Does anyone else get miffed when restaurants put something other than “Men” or “Women” on their restroom doors? When I’m hurrying to the bathroom the last thing I want to have to do is employ critical thinking skills. This is not the realm for creative expression.
Hey, Outback, I appreciate your food and the Australian theme, but I’m not from the Land Down Under so I have no idea what a bloke or a sheila is. Sure, it would seem that “sheila” is the female of the two choices, but I’m only basing that on the idea that the word “sheila” sounds like “she.” And is this really the best time to start making assumptions?
Just because cats and dogs are typically thought of as feminine and masculine respectively, does not mean those should be used as restroom designations. There are male and female dogs and cats. A female dog is a bitch, which is what I feel like every time I’m forced to make a decision with a full bladder.
Last week I was told there are some places that try to be all avant garde and use the left half an “M” for “Men” and the right half a “W” for “Women.” Okay, I suppose that’s better than interspecies designations. But all I wanna do is take a whiz, not solve the Da Vinci Code.
I have an idea, why not just slap a question mark on each door? Bottom line: stop it. Although I am glad it’s not Europe where every time you use a public restroom you have to tip a bathroom attendant. 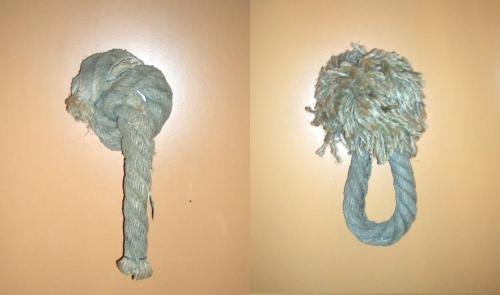 Okay, what am I looking at here? Time for some quick reasoning: The one on the left can't be the men's room because typically it's women that have ponytails. Obviously the men's room is the one that looks like Rod Stewart’s hair, right?
Proudly powered by Weebly